By Jonathan-Georges Mehanna and Tim Lomas

One-third of people around the world — which translates into almost 2 billion individuals — feel their lives are out of balance, according to a new Gallup and Wellbeing for Planet Earth Foundation study.

Thirty-four percent of adults across 122 countries surveyed for the study in 2021 said they rarely or never felt that the aspects of their lives are in balance.

This is one reason why measuring feelings of balance is part of the Wellbeing for Planet Earth Foundation’s mission to develop a globally inclusive understanding of wellbeing. 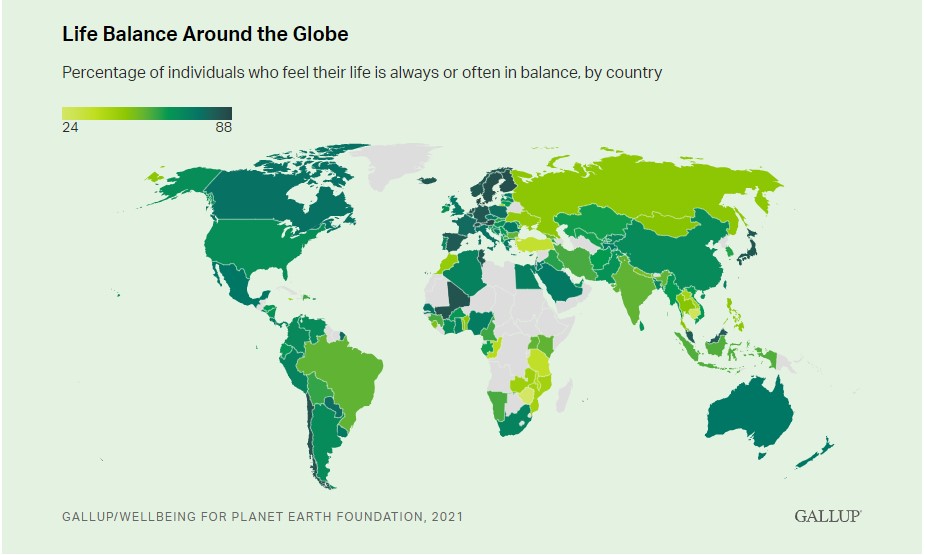 Where Is Balance Missing and Who Has the Most?

People in Zimbabwe, Türkiye, Tanzania and Malawi were among the most likely in the world to say their lives lacked balance: At least six in 10 residents in each of these countries reported feeling that various aspects of their lives were rarely or never in balance. 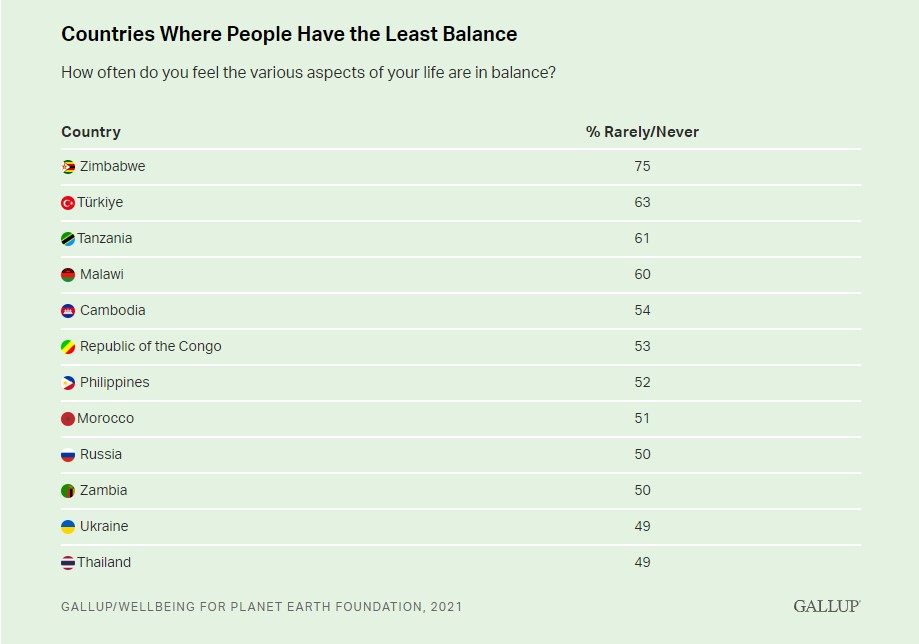 People in Denmark, Austria, Finland and Sweden, on the other hand, were among the most balanced — with at least 85% of residents in each country saying they always or often feel aspects of their lives are in balance.

Most of the countries with the highest rates of balance are wealthy Organisation for Economic Co-operation and Development member states. Mali and Tunisia are the two exceptions, which suggests income plays a role in the balance people feel in their lives, but it does not explain everything. 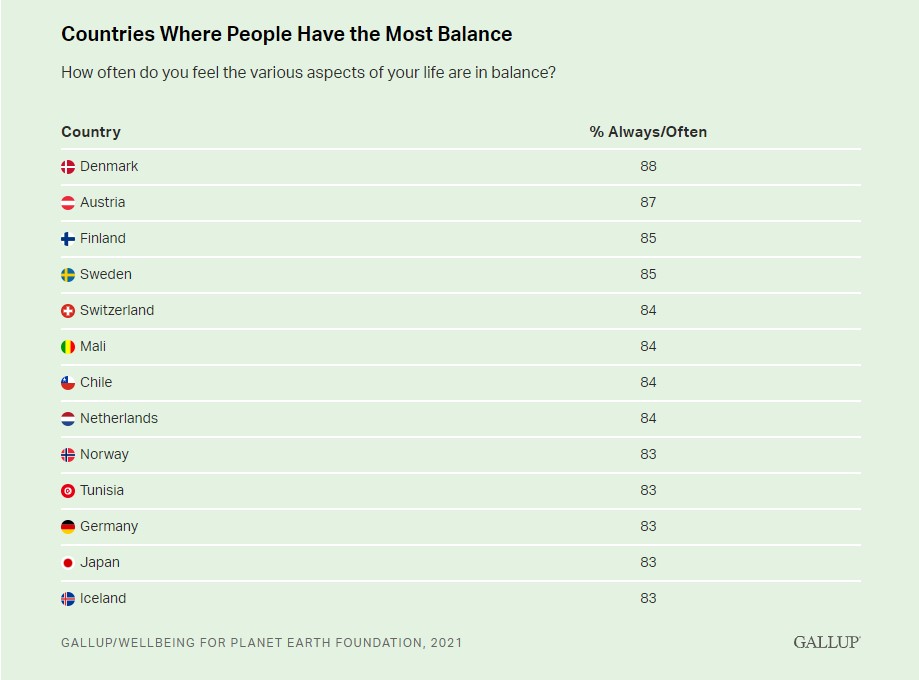 Globally, men and women were similarly likely to feel that their lives are in balance. More than six in 10 men (65%) and women (63%) said this is always or often the case, while about one in three said it rarely or never is (32% of men versus 35% of women).

However, large gender gaps exist in several countries. In Afghanistan, for example, 44% of women interviewed in 2021 — as the Taliban took control and the U.S. withdrew — said they rarely or never felt balance in aspects of their lives, compared with 30% of men. These differences provide yet another example of how women’s lives in Afghanistan were on the brink in 2021.

The starkest gaps appear when one looks at differences by people’s perceived ability to make ends meet. Globally, people who reported living comfortably on their current income were three times less likely than those finding it “very difficult” to get by to report never feeling their lives are in balance (6% versus 18%, respectively).

Notably, respondents who reported living comfortably on their current income were more than five times as likely to also report always feeling in balance as opposed to never feeling in balance (37% always as opposed to just 6% never). The gap was much smaller among those struggling the most to get by (23% to 18%), reinforcing the importance of economic stability in measuring wellbeing and the influence it has on one’s feeling of balance across different elements in life.

The lesson in all this is that the world urgently needs to find a sense of balance. This applies not only to countries where balance is harder to find — though these cases are certainly more pressing — but to all humankind.

This need for balance concerns all aspects of life. It can be about how people navigate their inner lives, finding coherence and purpose amid the turmoil and tension. It can also be about how to make society more peaceful and prosperous for all, including sharing resources and successes in fairer and more equal ways. And lastly, it can also be about how people can live sustainably and in harmony with nature, caring for the planet while also safeguarding human wellbeing.

These may be unique challenges, given the myriad issues facing humanity — from pandemics to climate change — but the world needs to meet them together to thrive and survive in this 21st century.

Dr. Jonathan-Georges Mehanna is a senior consultant at Gallup.

Dr. Tim Lomas is a senior researcher for the Wellbeing for Planet Earth Foundation and a psychology research scientist at Harvard University’s Institute for Quantitative Social Science.

Discover what our researchers and industry experts are saying about wellbeing.

Global Study Reveals Most Workers Enjoy What They Do (Gallup)

Good Relationships Are a Constant in Young People’s Lives (Gallup)

Want to know more about the work of the Global Wellbeing Initiative, our publications and other efforts to advance the state of wellbeing across the world?